Letter from MPP to Premier Doug Ford re OSC

Read the letter from MPP Nathalie Des Rosiers sent to Premier Doug Ford last year about his mishandling of Kathleen Finlay’s complaint regarding the Ontario Securities Commission and its failure to properly address the incident of sexual assault that occurred during her employment at the OSC. 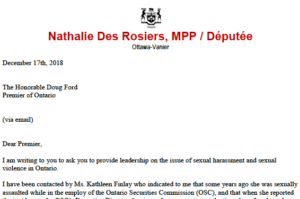 The Premier ignored MPP Des Rosiers’ outreach, too.  It was as a result of Ms. Finlay’s contacting the Premier that the OSC’s lawyers tried to muzzle her from speaking out, just as her boss did when he ignored her concerns and bullied her into remaining silent about the sexual assault.  The incident, and the damage caused by both the Premier’s and the OSC’s failure to address her concerns in a respectful, victim-sensitive manner were set out in an op-ed in NowToronto.  They were reiterated in the official video statement.

Ms. Des Rosiers raised the issue with the Premier on December 17, 2018, and again in 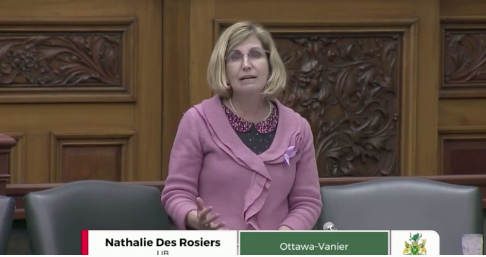 the Ontario Legislative Assembly on March 25, 2019. To date, she has received no response or reply from a premier who publicly claimed he would protect women who come forward with his life.

It is well established that most victims have serious reservations about coming forward after an incident sexual violence or sexual misconduct in the workplace. Animating these doubts is the fear that they will encounter more harm for doing so and that their jobs, careers, reputations and health will suffer.

If what happened here is what victims can expect when they speak out, the impact of #MeToo is much less than the media have asserted, and women are not nearly as safe in the workplace as they need to be.

In her statement in the legislature, MPP Des Rosiers quoted Kathleen Finlay, who urged “We all have a duty to ensure that women are protected — not harmed — when they come forward.”

You can see video Hansard of the Member’s statement here.