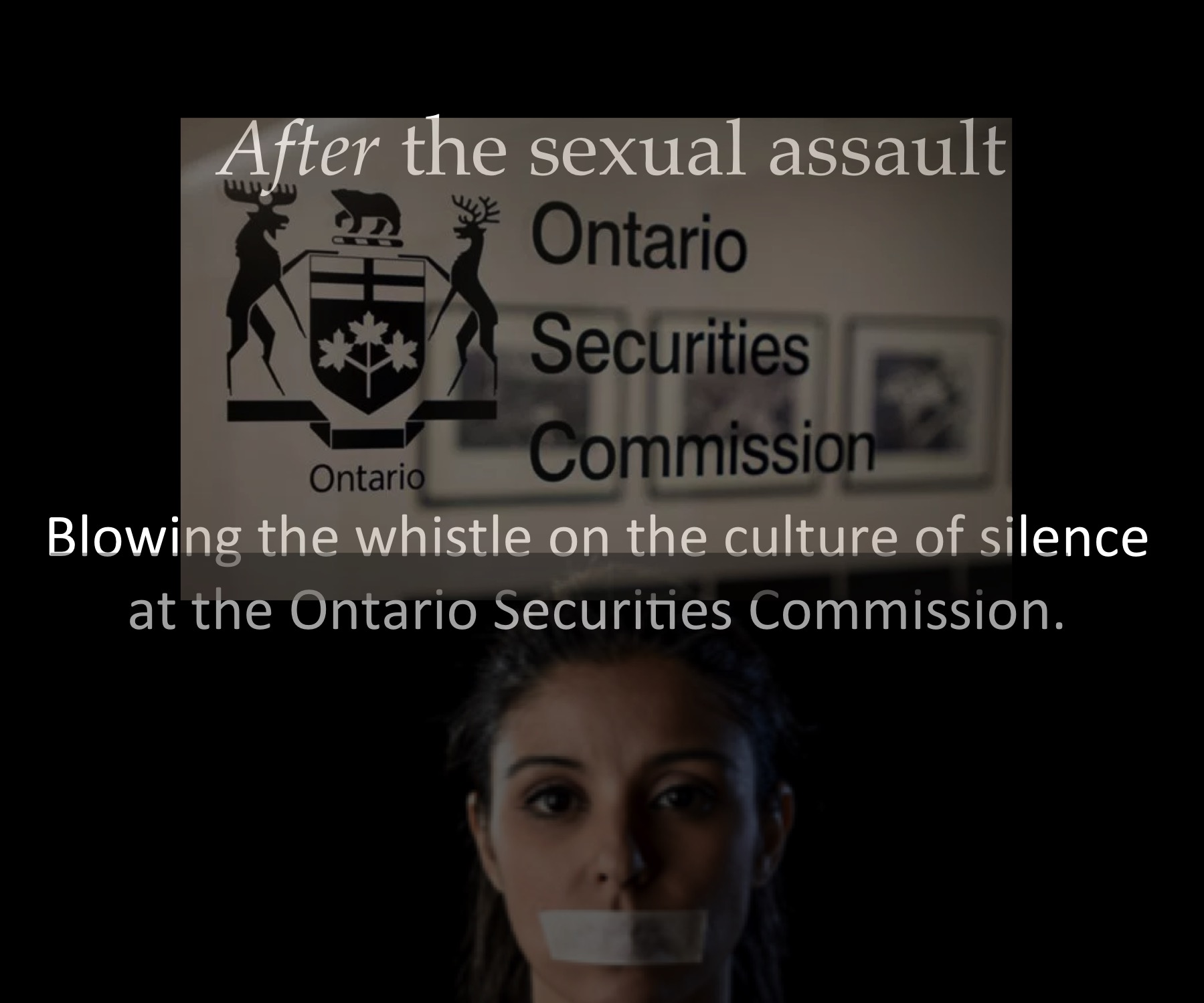 The Ontario Securities Commission says it believes in whistleblowing. But when it comes to its own wrongdoing, it’s a different story.

The Two Faces of Whistleblowing at the OSC

The Ontario Securities Commission recently announced $7.5 million in cash awards to individuals who blew the whistle on securities law violations at their companies. 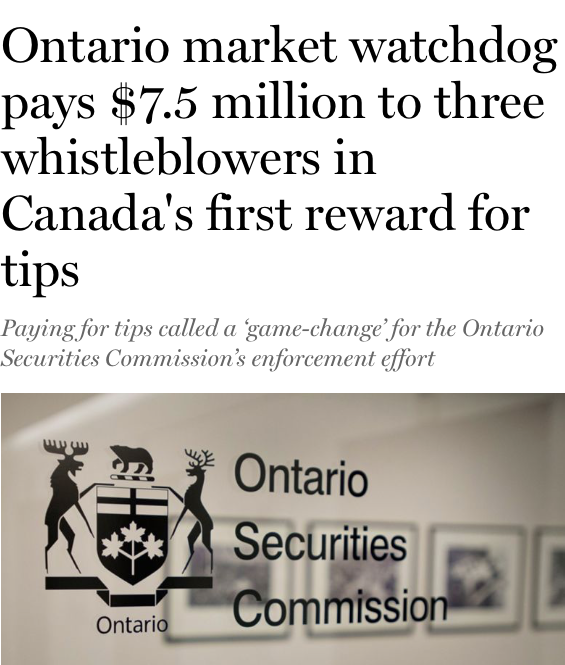 But when I blew the whistle recently, as a former OSC employee, about a culture that allowed me to be bullied by a high-ranking official into remaining silent after I was sexually assaulted on the job several years ago, I was muzzled again and warned by the OSC’s lawyers to:

“…refrain from sending communications to the Premier’s Office asserting wrongdoing on the OSC’s part, as well as making public disclosure of such assertions on your website…”

It was like Harvey Weinstein, whose lawyers routinely tried to muzzle his victims from blowing the whistle, had left Hollywood and joined the OSC.

I was not represented by a lawyer and had not even hinted at any legal action. I just wanted what so many other women have wanted in an era of #MeToo awakening: the chance for healing that had too long been denied. That effort turned out instead to be a replay of the nightmare that started long ago at the OSC and continues to this day.

I had been sexually assaulted earlier in my career at the OSC by the prominent head of a major securities commission during an out-of-town conference I was required to attend. When I reported it to my boss, a top-ranking official at the OSC, he refused to take any action and prevented me from pursuing it by making threats about my job if I took it further.  He wanted to protect his powerful colleague and friend.  He made my silence a job requirement. 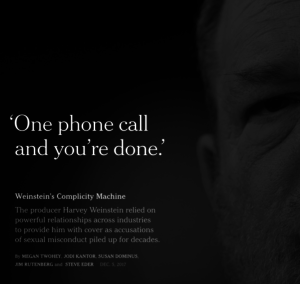 Harvey Weinstein wasn’t the only bad actor who tried to silence victims from speaking out.

In time, the bruises from the assault faded. The bleeding head injury eventually healed. The consequences to my dignity, peace of mind and livelihood from that incident, and how I was bullied into keeping quiet, never have. When I saw the OSC revert back to its previous efforts to silence me, Harvey Weinstein style, in a response directed by the regulator’s Chair and CEO, Maureen Jensen, it was like being assaulted all over again.

Ms. Jensen appears to be a big booster of whistleblowing — when it involves other organizations. “The Whistleblower Program has been very effective in generating tips and shining a light on information that previously would have remained in the shadows,” she said on the OSC’s website.

When it comes to the OSC’s own misconduct, it’s quite a different story.

Victims of sexual violence and potential whistleblowers share a common attribute. They both fear coming forward, and fear of reprisals is top among their concerns.  It is this apprehension that accounts for the fact that, in both cases, most never do report wrongdoing.

When I came forward to the OSC in 2018 to seek healing for that violent sexual assault and the bullying that followed, and to make its new management aware of the possibility that other women may also have been harmed, I was hit by a freight train of deception and accusatory, victim-blaming lawyers. I was not believed. I was not supported. I was made to feel like the offender. It was just like it had been years earlier when I was confronted by what I found to be a misogynistic workplace culture.

Back then, when I finally decided that I was no longer willing to accept sexual misconduct and bullying as the cost of keeping my job, I spoke out. I was not believed. I was not supported. I was made to feel like I had done something wrong. I was demoted. My decision to stand up against a toxic workplace unleashed a punitive and life-altering torrent of resentment and retaliation that ended my job and obliterated what was to that point an uninterrupted professional career of more than 20 years. The malignant consequences of my decision to speak out last to this day. 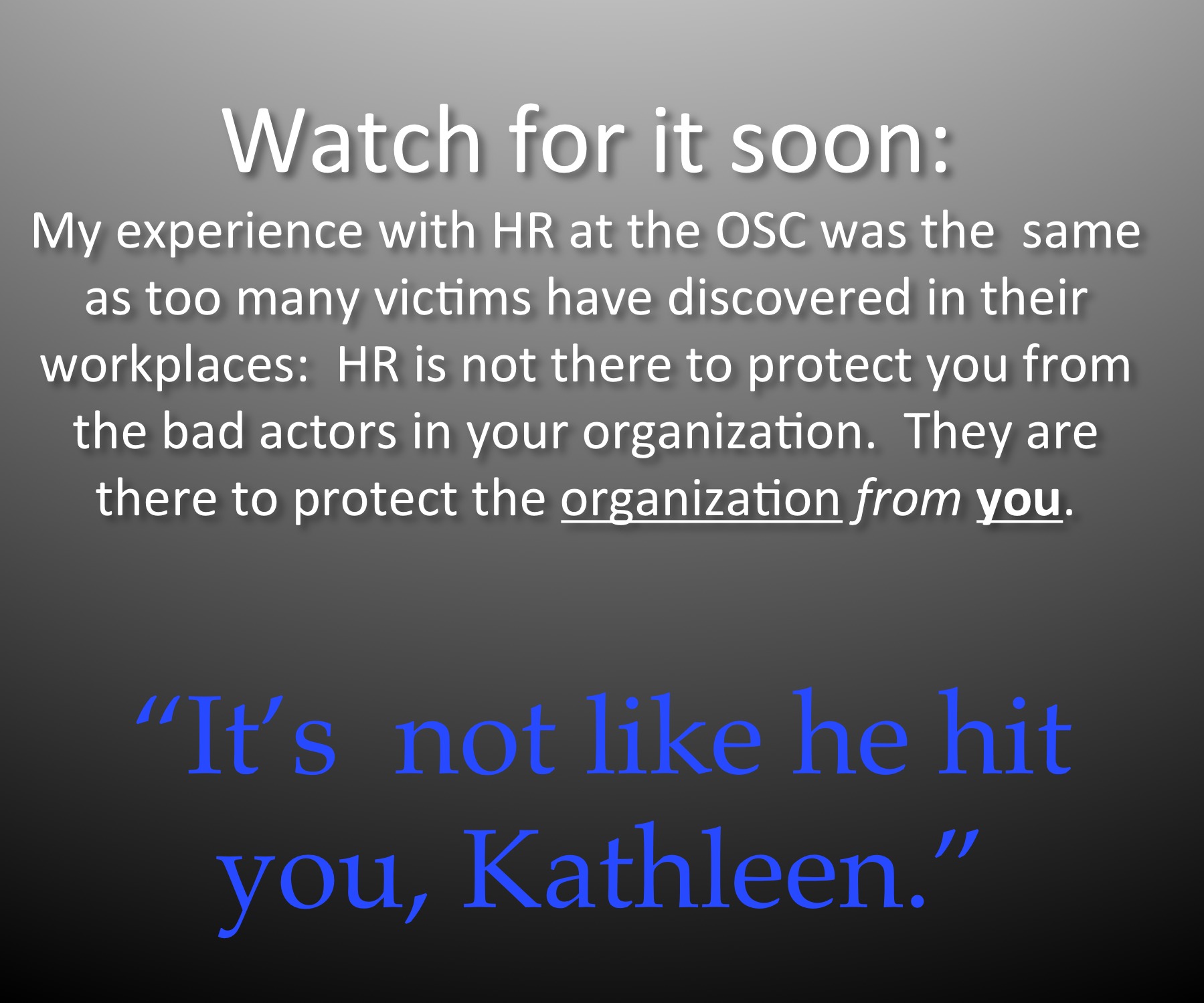 #MeToo gave many women who have long been denied a chance to heal the courage to come forward.  I was one.  But all I got was more harm. And a reprise of the OSC’s efforts to prevent me from speaking out by muzzling me.  It’s harder to do that when they can’t threaten my job, as they once did.  But given all the lawyers the OSC has, and the outside firm they brought in to reinforce their heavy-handed tactics, it still had a chilling effect. I felt intimidated, which can be damaging to a victim of sexual violence and its aftermath when a power imbalance played a prominent role in the attack or its mishandling.

Instead of following trauma-informed practices that are recommended by experts for responding to victims of sexual violence, the OSC pursued a trauma-inducing strategy fronted by their lawyers.  They almost make the panel of white male Republican senators at the Kavanaugh confirmation hearings look like models of sympathy and compassion.

The OSC reports to the current administration of Ontario Premier Doug Ford.  But reaching out to him to blow the whistle on the OSC’s harmful mishandling of my recent efforts, and to raise concerns about the safety of past and current OSC employees in light of my experience, only made things worse.  Much worse.

Presenting himself as the very model of the modern #MeToo politician, the Premier said publicly he will protect women who come forward to him with his life. But far from protecting me when I came forward, the real Doug Ford showed his true #MeToo colors.

Another powerful man had weighed in to add his contribution to the injuries and indignities caused by the others, and to allow the OSC to try to silence me — again. That really is institutional betrayal at its highest level. It also says a lot about Mr. Ford’s commitment to whistleblowing. To allow a whistleblower to be muzzled?  That ought to send up all kinds of red flags about this premier and the integrity of his administration.  It prompted a Member of Ontario’s Legislature to rise and make a statement calling out the Premier after he ignored her correspondence about the OSC’s harmful actions. Nothing changed. 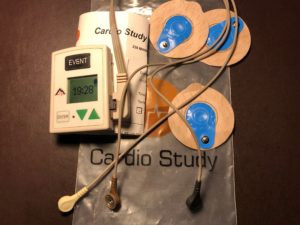 Another part of the high cost of coming forward in 2018 and trying to blow the whistle on the OSC.

The result of all of this is that my health has taken a serious adverse turn. This is often the outcome for victims dealing with the trauma of sexual violence, especially when it is unresolved by appropriate restorative healing.  It is why I have long called for sexual misconduct to be formally recognized as a workplace health hazard.  For me, it has meant many more visits to doctors and hospitals. The original incident of sexual assault and the bullying that prevented any healing had already left me with consequences that interfere with daily living — not episodically, but every day. Now I find myself dealing with the inconvenience of being tethered 24/7 to heart and blood pressure monitors and facing the unsettling reality of what that portends.

What experts call institutional betrayal can often re-trigger the most harmful kind of health-damaging traumatic memories.

I had been sexually assaulted by one powerful man, and then bullied into covering it up by another when I sought to have it addressed.  But what I find most disappointing is that it was a woman I reached out to, in a time of #MeToo reckoning, who could have begun to set things right but chose to do the exact opposite.

All I wanted from Ms. Jensen at the outset was an acknowledgement that what was done to me was wrong.  The U.S. Airforce’s statement of contrition and apology immediately following the tearful, but incredibly courageous, disclosure by Arizona Senator Martha McSally that she had been sexually assaulted when she was a combat aviator is the ideal model. It admits the obvious (sexual violence of any kind is wrong and cannot be tolerated) and spares the victim from going through the lengthy re-traumatizing experience that investigations involving historical incidents produce while offering little redressable benefit to a victim who is no longer employed in the organization.

An apology is always a good start on the path toward healing. I was also looking for assurances that the OSC would review incidents in the past to see if other women had been harmed, like I was, and may need support today. Needless to say, there was an expectation on my part that the OSC had gotten rid of the enabling and disrespectful mindset that permitted me to be repeatedly harmed when I was employed there, and that best practices for respecting and supporting victims who come forward were robust in the OSC of today.

It got nowhere close to that. Instead, it was like being knocked over by an avalanche of abuse and disrespect — yet again. I am haunted that this will be the fate of other women who also come forward, if something is not done. I worry that some may not survive it. I remember too well that Krista Carle did not.

We already know victims are afraid of coming forward. That makes it all the more important to blow the whistle on the bad actors, like the OSC, that are a big part of the problem. They need to be called out by everyone, and especially by political leaders and advocates who value a safe workplace and believe that, as a fundamental human right, women are entitled to be respected.

Whenever there is a major scandal involving a listed company, the OSC is among the first to ask where was the board of directors? This is a public institution that presents itself as a big booster of gender equity in the companies it regulates.  It calls on boards of directors to ensure compliance with the rules it sets and to take care that the good reputation of listed corporations is preserved. Boards are generally the guardians of the integrity of any organization.

But where is the board at the OSC? And why on earth in 2019 is it still stuck in a time warp where the roles of CEO and board chair are not separated, and one person — in this case, Maureen Jensen — holds both positions?  Best practices have long called for the offices to be separated and a non-executive chair to head the board. Does this explain the OSC’s hypocrisy when it comes to whistleblowing?

It’s time the OSC’s board made sure that it is not compromising the public regulator’s reputation, or the safety and gender equity of the women who depend upon it, by permitting one set of rules for itself while requiring another for everybody else.

To quote  Ms. Jensen, we all need to be part of “shining a light on information that previously would have remained in the shadows”. When it comes to its own actions involving sexual misconduct, the OSC is a good place to start.