Kathleen Finlay, founder of The Zer0Now Campaign, is available to assist journalists, scholars and researchers in learning about the life-changing, and sometimes tragically life-ending, impact of gender-based violence and sexual harassment, and comment on breaking stories.

Readers and viewers appreciate Kathleen’s compassionate and informed voice, based on her advocacy for other victims as well as her own harrowing experience as a victim of sexual assault, and later sexual harassment, and the betrayal of her prominent government employer, the Ontario Securities Commission, to protect her at the time. Her policy work to combat sexual violence and reduce its traumatizing impact has been reflected in legislation at the federal level and has been recognized on the floor of the Ontario Legislature. Recently, the Canadian government announced that it was creating the national action plan to combat gender-based violence which Kathleen had long called for, and she is active in bringing new thinking to suicide prevention, which is the tragic outcome for too many victims of gender-based violence and bullying.

Kathleen regularly appears in the media, including flagship news programs like CTV’s National News, CBC’s The National and Go Public and news talk broadcasts, like Charles Adler Tonight.  She is a frequent contributor to The Hill Times, Now Magazine and has been a regular commentator in The Huffington Post. Media inquiries should be directed here. 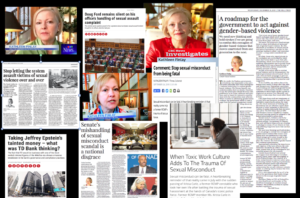