ZeroNow’s™ recommendations to improve the Trudeau government’s anti-harassment legislation (Bill C-65) were incorporated into the final bill, including our proposal for annual disclosure of sexual misconduct statistics, making Canada the first federal jurisdiction in the world to embrace a key transparency provision in the fight for zero tolerance.

This represents a major breakthrough in the role that transparency and accountability can play in achieving zero tolerance and creating a safer, more respectful workplace for everyone.

Bill C-65 received third and final reading in its amended form by the House of Commons on May 7, 2018 and was passed by the Senate on June 18, 2018.  The bill received Royal Assent in the Senate on October 25, 2018. Our original, and subsequent, submissions can be found on this page. We are proud to have played a key role in advocacy that represents a breakthrough for the voice of survivors who seek changes that will effectively combat the harm of sexual misconduct.

THANKS TO EVERYONE, AND ESPECIALLY THE SURVIVORS, WHO SUPPORTED OUR ADVOCACY OF THESE IMPORTANT CHANGES.

In my view, the extent of sexual misconduct in the workplace is so widespread, and its damage to the dignity and personhood of women so profound, that we have reached the point where the right to be protected from it should be recognized, not just by the policy of the government of the day, but as a fundamental human right.

—Kathleen Finlay, founder, The Zero Now Campaign™ in a submission to the Canadian House of Commons.

Canada is in the midst of updating its laws to more fully address sexual harassment in federally-regulated workplaces, and to extend such protections to parliamentary and political staff.  Known as Bill C-65, the proposed law, which  now includes a number of amendments incorporating recommendations made by The ZeroNow Campaign™ (see below), including our Sunshine law proposal , is a major step in adopting practices to make the workplace safer and more respectful for everyone.  (The Manitoba government also adopted our Sunshine law proposal for its workplace anti-harassment legislation.)

We are disappointed, however, that amendments to the bill did not include removal of the “vexatious” clause (see below), which allows the Minister, or the Minister’s delegate, to label a complaint as “trivial, frivolous or vexatious.” In our view, the “vexatious” clause is out of place in any modern approach to sexual misconduct remedies and represents a throwback to a much discredited era when victims were treated as the offenders.

As we told the Committee in our submission:

For anyone entrusted with investigating sexual misconduct to be able to tar a victim — as Bill C-65 would allow — with the label “trivial, frivolous or vexatious” is a terribly counterproductive move, and one that could well place more women at risk because they will be reluctant to come forward.  It is totally at odds with the principle that we should be respected and believed. The “vexatious” provision loudly portrays women as possible mischief-makers in raising sexual misconduct claims, when available evidence is precisely contrary to that notion. In doing so, it perpetuates a false stereotype that has no place, and no factual justification, in the 21st century.

Here is a summary of the recommendations ZeroNow™ made to the Committee on Bill C-65:

1   Remove the proposed “vexatious” amendment to Subsection 127.1(9) of the Canada Labour Code, which would permit the Minister to refuse to investigate a complaint of harassment or violence if the Minister is of the opinion that “the matter is trivial, frivolous or vexatious.”

Through amendments to Bill C-65, and by other legislative and policy instruments, as may be required:

2   Establish a sunshine law requiring the annual public disclosure of relevant sexual harassment statistics, including the number of incidents reported, the outcome of the complaint and any financial settlement paid for every federally controlled entity, including Parliament itself.

3   Prohibit non-disclosure agreements (NDAs) from being included in any settlement involving a sexual misconduct complaint. These devices amount to a DNR (do not resuscitate) order for the careers and reputations of victims.  They prevent survivors from speakingout to defend our reputations against bad employer actors and stifle our ability to protect other women from similar abuse.

4   Support an active policy in the federal public service to hire survivors of sexual misconduct (Hire US Back™) , and to provide the necessary means of creating a safe and welcoming workplace so that survivors can begin to rebuild their lives and careers.

5   Provide for a federal-workplace-wide whistleblower system allowing employees, as victims, witnesses or bystanders, to report incidents of sexual misconduct on a confidential and, if they wish, anonymous basis, and to provide for the follow-up of a neutral party for information on options going forward, if such guidance is sought.

If you would like a copy of our original submission, you can request it here.

Second Submission to House of Commons on Bill C-65

In a heartfelt and deeply personal submission to the House of Commons committee drafting anti-harassment legislation for federally regulated workplaces, Kathleen Finlay shares her story and those of former and current federal employees who have reached out to her.

It is only when lawmakers and policy leaders fully understand how damaging and life-altering an encounter with sexual violence, harassment and bullying can be that they will truly know the extent of the changes that are required to create a safer, zero tolerance workplace. 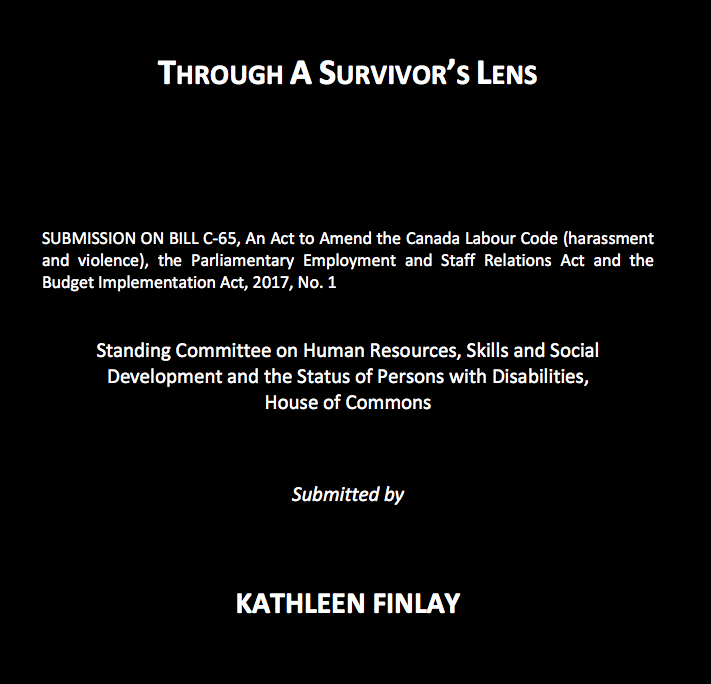 Whether it is the fear of coming forward in the first place, or the experience with a botched investigation where they are re-victimized, or the aftermath of the ordeal where they are left alone, isolated and forced to pick up the pieces, victims constantly express the strongest misgivings about the system that is supposed to protect them.

ZeroNow’s™ Recommendations to the Senate on Bill C-65 can be accessed here.  The final bill, passed by  the House of Commons on May 7, 2018 and the Senate on June 18, 2018, incorporated a number of recommendations made by The ZeroNow Campaign™, some of which were unique to ZeroNow™ and had not been proposed anywhere else.

“The public of Canada has a right to know how extensive, and with what consequences, sexual misconduct is occurring, especially in the ranks of taxpayer-funded entities,” Ms. Finlay wrote. “Closing the door on the voluntary personal narratives of victims and concerned employees, even though they are published without attribution or identification, prevents the public from seeing the full picture.” 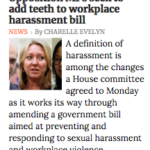 The necessary culture change isn’t going to happen when things start with the “bad idea” of having to go to one’s supervisor at the outset of a complaint. 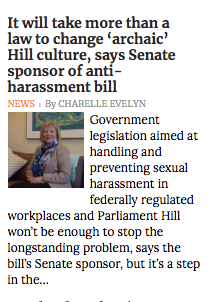