Kathleen Finlay’s Interview with Angie Seth, CTV News Channel, on The ZeroNow Campaign’s work to get national party leaders on the record about their positions on sexual harassment solutions (recorded live).

Here are the 10 questions The ZeroNow Campaign posed to party leaders. You can see them here.  They form a roadmap to a safer workplace that victims and survivors across Canada and beyond have consistently told ZeroNow would make all the difference. But they need political support from leaders at the top to make them happen. Kathleen Finlay will be on the CTV News Channel with Angie Seth on Saturday September 18th to talk about the results, and what they mean for Canadian women.

In The Hill Times 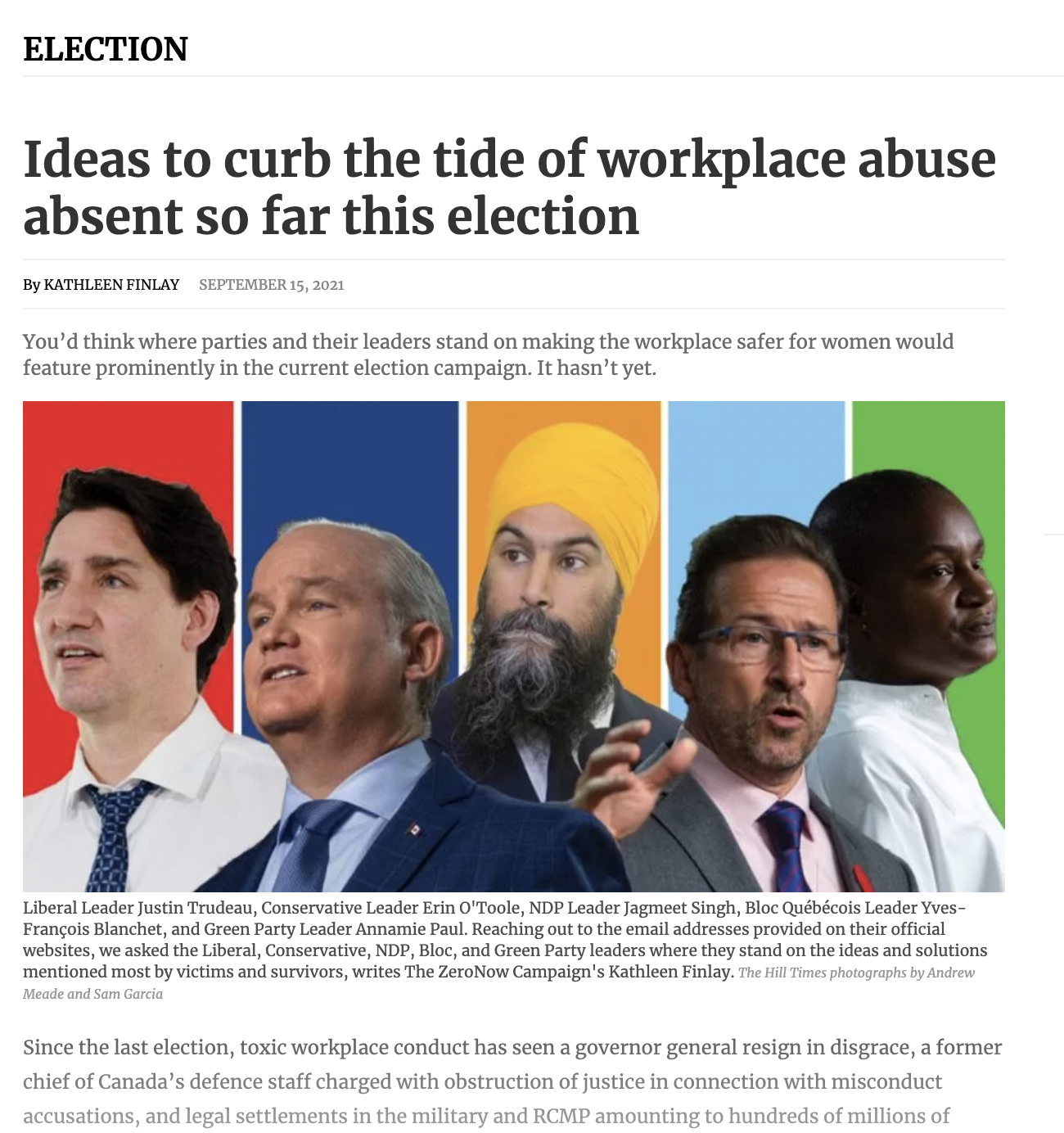 Are they hearing us?  The ZeroNow Campaign gets Canada’s party leaders on the record about where they stand on gender-based harm and sexual harassment.

During nationally broadcast debates in the last federal election, the terms “sexual harassment,” “sexual misconduct” and “sexual violence,” or anything related to those subjects, were neither raised nor commented on by any party leader.  There was almost zero discussion of these issues on the campaign trail.  That must never happen again.

Women across Canada tell us that gender-based harm and sexual harassment in the workplace remain inadequately addressed at the top, leaving too many women at risk every day. Over the past several months, toxic workplace conduct has seen a governor general resign in disgrace, a former chief of Canada’s defense staff charged with obstruction of  justice in connection with sexual harassment accusations, the removal from command or criminal charging of other general officers, and legal settlements in the military and RCMP amounting to hundreds of millions of dollars.  Shocking as these events are, they are but telling milestones of the continuing failure of the system to protect women from gender-based abuse and harm in the workplace and from reprisals when they come forward.

As a nationally recognized voice in combating gender-based violence, The ZeroNow Campaign is determined to ensure the subject of sexual violence and sexual harassment in the workplace is given the attention it deserves by party leaders during this election.

We are asking leaders for their positions on this important subject, as well as on several proposals intended to be systemic game-changers in combating gender-based harm. We will share their responses with Canadians prior to the election on September 20th.