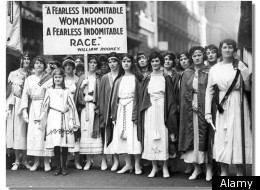 Recent events in the United States have seen the long-settled debate over the right of women to have access to birth control bizarrely reopened amid congressional side shows and talk show host tirades. Many are left wondering how far the U.S. has come on issues that are vital to women. But how far has Canada come?

Claims of sexual harassment are rampant in the RCMP, with more than 1000 cases filed since 2005, prompting some to question the culture of the nation’s foremost law enforcement symbol. My own experience a few years ago, which ironically involved a high-profile regulatory agency in Ontario, also offers an instructive lesson on what can happen to women when they demand a workplace free from sexual harassment and reprisals.

In my case, the organization ignored its own anti-harassment policy and allowed the subject of my complaint, who just happened to be my boss, to decide the outcome. Predictably, I was tarred as the offender and his solution was to demote me. I went to the Ontario Human Rights Commission, which, after fumbling the case for several years, finally gave my concerns serious attention. It was at that point that my employer offered me a financial settlement that also involved leaving my job and withdrawing my complaint. I agreed. What I didn’t realize was that the professional career I had worked hard to build over more than 20 years was effectively ended too.

Most women who have experienced the aftermath of a sexual harassment complaint know what’s going on. It’s payback time.

Prospective employers seem impressed with my resume at the outset. Meetings always end on a positive note. But the problems begin when they go back to my previous employer even for an informal reference. When only days earlier I had been asked how quickly I could start, what greets me afterward is stone silence. Emails are no longer returned. Most women who have experienced the aftermath of a sexual harassment complaint know what’s going on. It’s payback time. Years later, it is still impossible to find a job in my field.

I’ve pleaded with my former employer to stop maligning me so I can work again. Recently, the organization responded by retaining a prominent lawyer who threatened me with what amounts to financial ruin if I reveal the circumstances that caused me to leave my position or who was involved. I can’t even be up front with potential employers about what occurred. All they hear is a very one-sided version of events from an organization with a long memory and a large axe to grind. Women don’t get a lot of career boosts when unwanted circumstances have forced them to stand up to power and tell it to back off.

Unfortunately, recourse in such situations is virtually non-existent. The courts are no place for an ordinary individual to go up against a major organization with deep pockets. Human rights commissions are agonizingly slow. And for all their self-serving pronouncements, public policy leaders appear to have little appetite for addressing the shortcomings that still leave too many women dealing with toxic bosses.

The Centre for Research on Violence Against Women and Children found that Canadian women who filed sexual harassment complaints “experience a negative effect on their work and personal lives.” As one woman who participated in the research reported, “Your past employer might not give you a good reference for a job. They might label you as a troublemaker.”

Career ostracism and reprisals are an almost universal consequence of confronting sexual harassment, according to a number of international studies. I’ve talked with many women about their experiences of being estranged figures in the workplace today. Frustration, financial horrors, and depression are common outcomes.

From single mothers struggling to make a better life to women defending their rights to be free of bosses channeling the slap-on-the-behind Mad Men era and baby boomers who are forced to make a Hobson’s choice between caring for an elderly parent and carrying on with their careers, the workplace can be as cold, distant, and inflexible in the 21st century as it was in the last.

Women pay the most immediate price for this. But ultimately it is all society that bears the cost when it permits those who can contribute to a productive economy, and uphold values of compassion and dignity at the same time, to be marginalized. It’s a subject that could benefit from some serious inquiry by Canada’s lawmakers. The room would be filled with women who have a lot of value to add.