Biden’s Blunders: It’s Not About Intention. It’s About Entitlement

Recommended by the Editors of Medium

“I’m not sorry for anything I have ever done.”
Joseph R. Biden Jr, former vice-president of the United States, commenting on recent allegations of inappropriate physical contact.

The response is predictable. When an allegation of sexual misconduct is raised, the powerful man assures everyone that it was not his intention to cause harm. The logic, and I use that term generously, goes that since there was no ill-intent, there is no fault.

We heard that line recently in connection with allegations by former Nevada state representative Lucy Flores against Joe Biden, who was then vice-president of the United States. Ms. Flores reported that Biden approached her from behind and placed his hands on her shoulders at a 2014 political rally. He then leaned into her, smelled her hair and slowly kissed the top of her head. In a statement, Biden said it was never his intention to act inappropriately. Ms. Flores has left no doubt about how demeaned she felt by the incident. Other women have since come forward complaining about similar inappropriate physical contact by Biden. 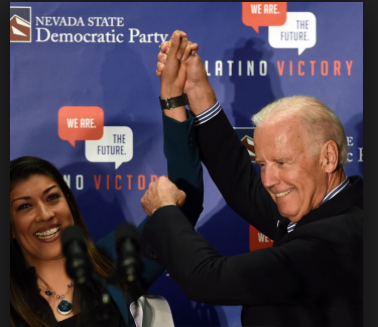 Biden’s actions confirm a long-held view: powerful men think it is about them. Their egos will not permit anything less. The impact their actions have on lesser mortals is of minor concern. When it comes to sexual misconduct in the real world, however, it is always the impact of these acts on the victim-recipient that ought to concern us. A lot has to change before that message sinks in.

Looking at the convergence of victim-fears, bystander blindness and accommodations given by the loyal to the powerful in our society — even involving powerful men acting inappropriately — it is not surprising that nobody said anything at the time to call out the actions of a commanding political figure. Think about how Jane Fonda stayed silent about Harvey Weinstein, or an entire political party turned a blind eye to the sexploits of Bill Clinton.

There are two sets of rules in the workplace. One for the powerful and another for everyone else. What do you think would happen if a manager in a Walmart store walked up behind an employee selling shoes, put his hands on her, smelled her hair and then kissed her on the head? The manager would be the one getting the boot — and fast.

When a man — especially one in a position of authority — demeans and disrespects a woman, whether by words or deeds, he takes something from her that does not belong to him: her dignity. At the very least, an apology is necessary to restore what was stolen.

In a way, Biden’s explanation echoed Prime Minister Justin Trudeau’s last summer, when it was revealed that he had groped a woman back in 2000. Her account spoke to the inappropriate nature of the contact and about being “blatantly disrespected”. His version talked about the different perceptions men and women can have of the same event. He said he had a good time that day. She clearly did not, and Trudeau knew it when he made that insensitive comment.

The offensive behaviour of Biden and others at the top is about much more than innocent intentions gone awry. It is about powerful men acting in inappropriate ways toward women because they think they are entitled.

The asymmetrical power relationship between the perpetrator and the victim magnifies that sense of entitlement and removes the social trip wires that otherwise preserve normal workplace conventions. Biden, days after the allegations were made, has assured America that he gets it But he clearly does not, or he would have offered an apology for the discomfort women say he caused them. In fact, he doubled down on the non-apology, boasting, “I’m not sorry for anything I have ever done.” Apparently, it was not intended as a joke.

When a man — especially one in a position of authority — demeans and disrespects a woman, whether by words or deeds, he takes something from her that does not belong to him: her dignity. At the very least, an apology is necessary to restore what was stolen.

In these relationships, powerful men are empowered in their bad actions by the knowledge that powerless women are unlikely to blow the whistle or report them out of fear. They have a lot of tools and accomplices at their disposal to preserve that scenario.

Powerful men are big players in their organizations and often control process and outcomes in ways they want. They also know that if the less powerful woman reports any offensive behaviour, there’s a good chance she will not be believed. Maybe she can even be silenced by threats about her job and career. The most infamous example of that was the Harvey Weinstein complicity machine.

How often have you heard of a CEO sexually harassing a female member of the company’s board? Or a junior lecturer inappropriately kissing a tenured professor? You haven’t, because it almost never happens. Victim exploitation by the powerful moves down, not up, the organization hierarchy.

And it can get worse. There is a whole institutional culture of deferment and accommodation that is more than willing to assist in this entitlement delusion and even weaponize the power of the organization against those who have blown the whistle. It happens often to both whistleblowers and to victims of sexual misconduct who speak out. It happened to me.

In the sexual misconduct train wrecks that have upended the lives and careers of victims, too often the retaliating organization has been found behind the controls.

Outside investigators retained to look at a plethora of sexual misconduct allegations at giant broadcaster CBS found, “(w)hen faced with instances of wrongdoing, the company had a tendency to protect itself, at the expense of victims,” according to The New York Times.

There’s even a clinical term used to capture the willingness of some organizations to go to great lengths to defend perpetrators at the top, and make victims pay for pushing back. It’s called institutional betrayal. It’s a very powerful lens through which the whole panorama of sexual misconduct can be viewed. In the sexual misconduct train wrecks that have upended the lives and careers of victims, too often the retaliating organization has been found behind the controls.

As long as the intentions of powerful men is the permissible frame of reference to assess what is proper and what is not in their conduct toward women, we will never make genuine progress in achieving zero tolerance. The workplace, the campus, the political arena and the community will all be less safe than they need to be. Our social algorithms need to be adjusted.

It’s not about intention. We must not let miscreants go there. Ever. It’s about power and men who have it who think they can get away with their misdeeds because of it. And it’s about the enablers and facilitators around them — often including women — who are happy to drive the getaway car when the boss puts his hands where they don’t belong.