For the past two years, Kathleen Finlay has been calling for  the creation of an independent  Commissioner, reporting to Parliament, to handle investigations and policy gaps dealing with sexual misconduct, gender-based trauma and bullying across all parts of the federal public service, including the military and the RCMP. With recent high-level scandals at Rideau Hall and in the Canadian military, it’s needed more than ever.  (Latest from the Hill Times) 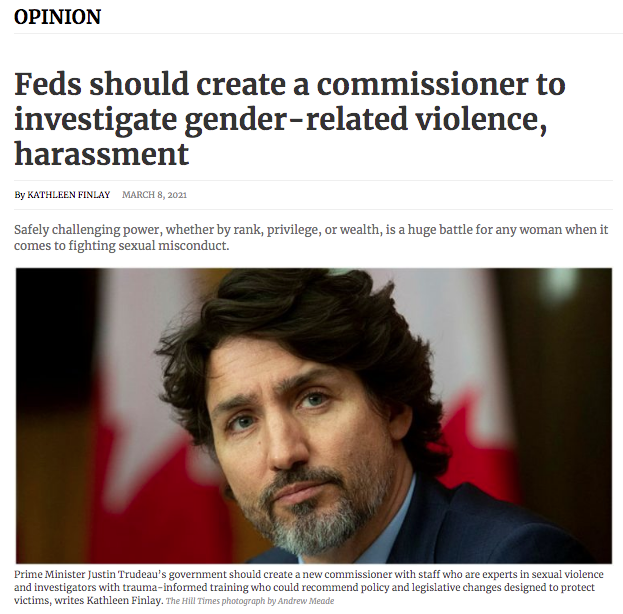 Bullying at the highest office in the land at Rideau Hall. Sexual misconduct involving a former chief of Canada’s defence staff that began while he wore his general’s uniform. Then, out of the blue, his successor is hit by his own sexual misconduct issues. It seems like some kind of new pandemic is on the loose, leaving the country’s most powerful figures vulnerable to being attacked by their own misjudgment.

While the role of ego and an overweening sense of entitlement should never be discounted, the real virus that’s driving this outbreak is the tendency toward willful blindness on the part of those at the top, together with a culture that sends the message that high performing predators will be valued over the victims they violate.

Turns out that Defence Minister Harjit Sajjan knew more about the allegations made against General Jonathan Vance — and a lot earlier — than he first admitted. Vance was Canada’s top military chief at the time. Also turns out that the Prime Minister’s Office has known for years that there were concerns about Vance’s conduct, since Sajjan’s staff briefed senior PMO officials on these issues in 2018.

It’s a predictable pattern we’ve seen time and again when men at the centre of power and influence are involved. Media mogul Harvey Weinstein had a small army of well-connected supporters and wealthy friends who were willing to ignore rumours and whispers of abuse that swirled around the producer. Prince Andrew, the Queen’s third child, has yet to account for what he knew, and when, about his friend American financier Jeffrey Epstein’s horrific exploitation of teenage girls. His eyesight seems to have been conveniently selective.

Then there is the latest headline-grabbing scandal involving bullying and abuse by New York Governor Andrew Cuomo. Lindsey Boylan, one of three brave women to come forward with allegations of misconduct, recently wrote that top women around the governor normalized his mistreatment of female staff members. It’s a familiar theme. Safely challenging power, whether by rank, privilege, or wealth, is a huge battle for any woman when it comes to fighting sexual misconduct. The workplace is filled with the career casualties of those of us who have tried.

It is precisely the fear that bad actors at the top will be protected, and any woman coming forward will be crushed, that causes most victims to never report sexual misconduct. We suffer in silence or quit because we know the system is rigged against us.

We know this not just because of evidence accumulated from half-a-century of research into sexual harassment, but also from the lived experiences of countless victims. Many have reached out to me over the years to say they regretted coming forward because it made things so much worse. They talk about exchanging one problem — sexual harassment — for another — retaliation and the monster of institutional betrayal that is seldom far away when dealing with commanding predators and big organizations. It’s not a trivial matter. As I have long observed, the sequelae of career, medical, and emotional harm that often comes from sexual misconduct can not only be life-shortening, it can be life-ending.

The biggest barrier to coming forward and fighting sexual misconduct in the military and anywhere else is the lack of confidence women feel that we will be treated fairly and without adverse consequences.  That’s the cycle we’ve got to break.

The solution lies in a major paradigm shift, starting with taking responsibility for investigating complaints about sexual harassment and bullying away from the military, Department of National Defence, RCMP, and other government agencies, and placing it in the hands of a new officer reporting to Parliament.

For some time, I have been calling for the creation of an independent federal commissioner with responsibility for investigating gender-related violence, bullying, and harassment. Staffed by experts in sexual violence and investigators with the best trauma-informed training, the commissioner’s office could also recommend policy and legislative changes designed to protect victims from harassment, bullying, and domestic abuse. It’s a structural re-approach to sexual misconduct and related abuses that could lead the world in eradicating this malevolent virus from the workplace.

Changing military generals, or even a governor general, is a symptom of a much bigger problem. Let’s not confuse it with the solution. Real progress requires a sea change in how we approach this war against women, starting with calling out those who turn a blind eye to wrongdoing or are just blind to new ideas that can make a huge difference.

Kathleen Finlay is the founder of The ZeroNow Campaign to combat sexual trauma.

A roadmap for the government to act against gender-based violence.