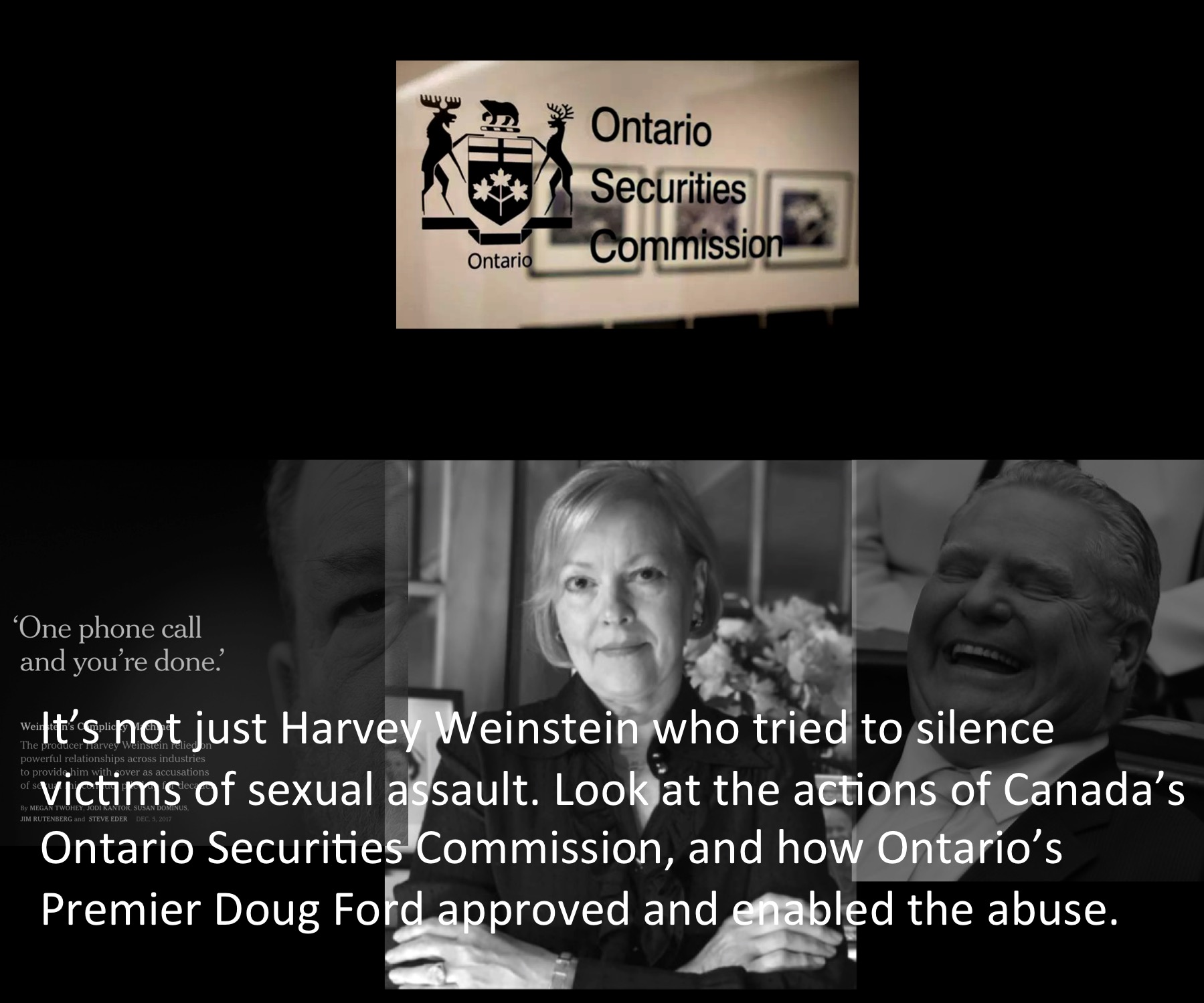 If a prominent public agency like the Ontario Securities Commission can pull Harvey Weinstein-type stunts to blame and silence a victim of sexual assault, and do it with the full knowledge and support of the Premier of Ontario, how safe is any woman in the workplace?

Silence is dangerous. But coming forward can also be hazardous to a victim’s health, causing lasting trauma that can endure for years and even decades.  In 2018, I turned to my former employer, the Ontario Securities Commission, to seek long-denied healing for a violent sexual assault that occurred earlier in my career. My attacker was the powerful chairman and CEO of the Alberta Securities Commission. When I reported the assault to my boss, the OSC’s executive director, he bullied me into staying silent. As the Ontario Legislative Assembly was told during official proceedings on several occasions, he gave me a choice: keep quiet or lose my job. I saw that as a terrible betrayal.

To this day, it has left a deep imprint of life-altering consequences and frequently re-traumatizing memories. But it was only the beginning of my encounter with a toxic culture at the OSC that eventually saw my job torpedoed and my chosen career of more than 20 years totally demolished by the retaliation that followed.

#MeToo unleashed a wave of hope for women who had long been denied healing.  But when I came forward in 2018 looking for healing and closure, it was like being thrown right back into the jaws of institutional betrayal. Instead of a trauma-informed, victim-sensitive response, I was greeted by a fast-moving freight train of heavy-handed lawyers.

In 2018, #MeToo gave me the courage to come forward. I turned to my former employer, the Ontario Securities Commission, to seek long-denied healing for a violent sexual assault I never formally reported because my boss bullied me into staying silent about it.  This time, it was even worse.  My efforts to find healing were weaponized against me.  I was not believed, I was not supported. I was made to feel like I was the offender. And this happened under the OSC’s first woman CEO.

My efforts to find healing were, once again, weaponized against me. I was not believed. I was not supported. I was made to feel like the offender. The ghosts of the OSC’s misogynistic culture were still rattling their chains. As victims who have experienced betrayal and abuse at the hands of the organization they reached out to for help will tell you, it was like being assaulted all over again. Then this prominent government agency that regulates the conduct of others tried to muzzle me — a second time — borrowing from the playbooks of predatory monsters Harvey Weinstein and Jeffrey Epstein.

It was a chilling reminder of what my boss did years earlier to keep me silent about being sexually assaulted. And this time, it was being done with the full knowledge and approval of the OSC’s board of five women and six men, as well as the most powerful political figure in Ontario, Premier Doug Ford. That’s quite a wall of power and privilege to go up against. They could have put a stop to the intentional harm, the abusive victim-bashing and the OSC’s most recent efforts to silence me. They chose not to. That makes them enablers, pure and simple.

When prominent organizations and powerful men think they are immune from the consequences of their conduct, as the documentary Untouchable describes of serial predatory Harvey Weinstein, no victim coming forward can be confident that she will not be re-traumatized and subjected to more harm. That allows the dangerous culture of fear and silence to persist.

A powerful premier who turns a blind eye to wrongdoing and enables a prominent government agency to muzzle a victim with its heavy-handed lawyers. What chance does any woman have against a stacked deck like this?

Conduct like what I’ve experienced at the hands of the Ontario Securities Commission — first when my job was threatened and I was bullied into remaining quiet about being sexually assaulted by the head of another securities regulator, then, some years later, when finally standing up against the misconduct that was occurring in a misogynistic culture cost me my entire chosen career of more than 20 years and millions in lost income, and finally, after I came forward in the surge of #MeToo victims seeking long-denied healing — is the exact opposite of the trauma-informed response to victims that sexual violence experts and psychologists universally recommend be followed in order that further harm, and perhaps life-altering medical consequences, be avoided.

And yet this is just the very short tip of a very deep iceberg of intentional retaliation and abusive conduct. Harm on this scale doesn’t happen by accident. It is the result of a well-calculated plan on the part of high-ranking public officials, ably assisted by a prominent board of directors and top-drawer lawyers.

That narrative is irrefutably strengthened when set against the fact that the OSC was fully aware of the harm it was inflicting on me and the price in physical and emotional health it was taking.  The OSC meant it to be harmful.  Just as it was when I reached out to Premier Doug Ford for help, and he did nothing except enable a cascade of traumatic events that saw the OSC try to muzzle me again. This time, it was with his blessing.

I’ve been told over the years I have some facility with words.  But to be honest, it is beyond my ability to convey the painful despair I have felt every day as I live and relive this OSC nightmare.  One assault is always traumatic.  But to have one’s dignity battered and crushed over and over is more than anyone should have to endure.  It is the reason why some victims no longer endure it, never to return from the dark valley of betrayal that consumed them.

Most women who have been sexually assaulted or have experienced other forms of sexual violence, abuse and harassment never report these incidents. If you wonder why, you only need to look at what happened to me. No woman wants to be worse off for coming forward than if she had stayed silent. No victim wants to risk more damage to her health after her career has been obliterated as well.

So, if you are concerned about the reluctance of victims to come forward, and think that a culture of fear and silence makes the world less safe for our sisters, our daughters, our wives, our mothers and others, ask yourself this: When you have one of the most powerful political leaders in the country complicit in the effort to muzzle a victim — when he can successfully duck when asked about it in the Ontario Legislature without the media even stirring from its Question Period slumber — or when one of North America’s leading regulators of business can get away with shaming a victim of sexual assault and turn her into the offender without as much as a flutter in the boardroom’s curtains, what chance does any woman have against that stacked deck?

Until the bad actors and betraying organizations are called out for the harm they are causing, women in the workplace, in the community and on the campus will never be as safe as we need to be. 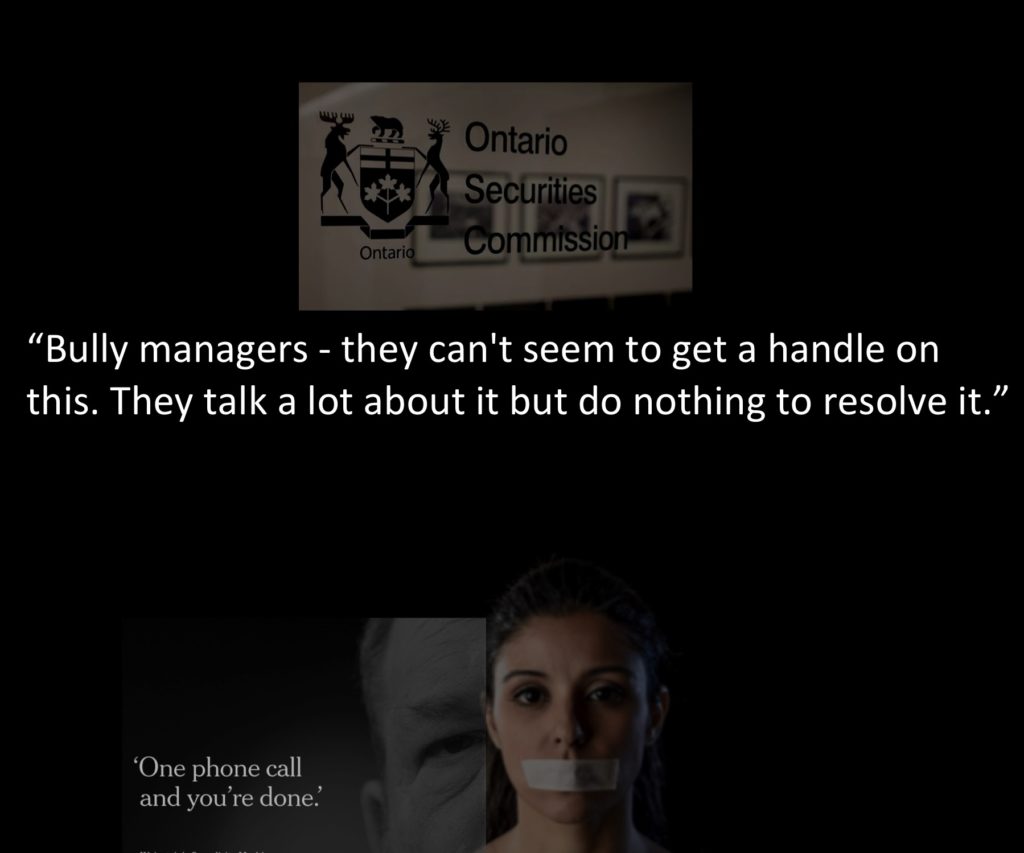 See what some employees are saying about the OSC. 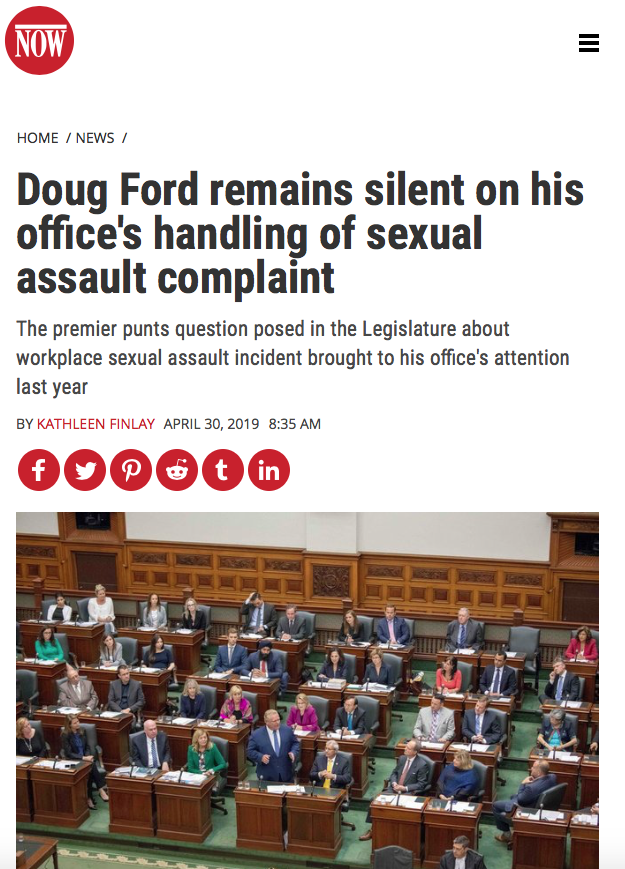 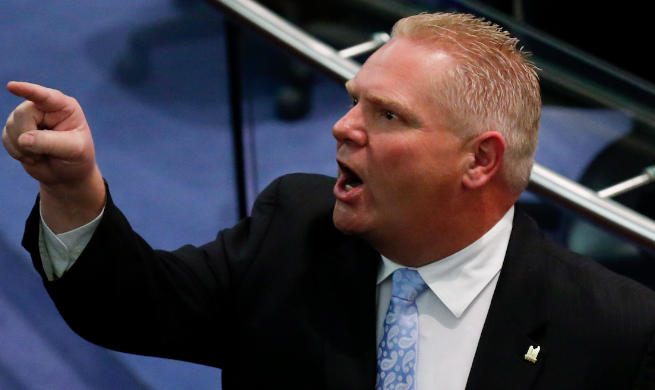 See more ways where Doug Ford fails women in the workplace, on the campuses and in the community.  See what’s behind the story. 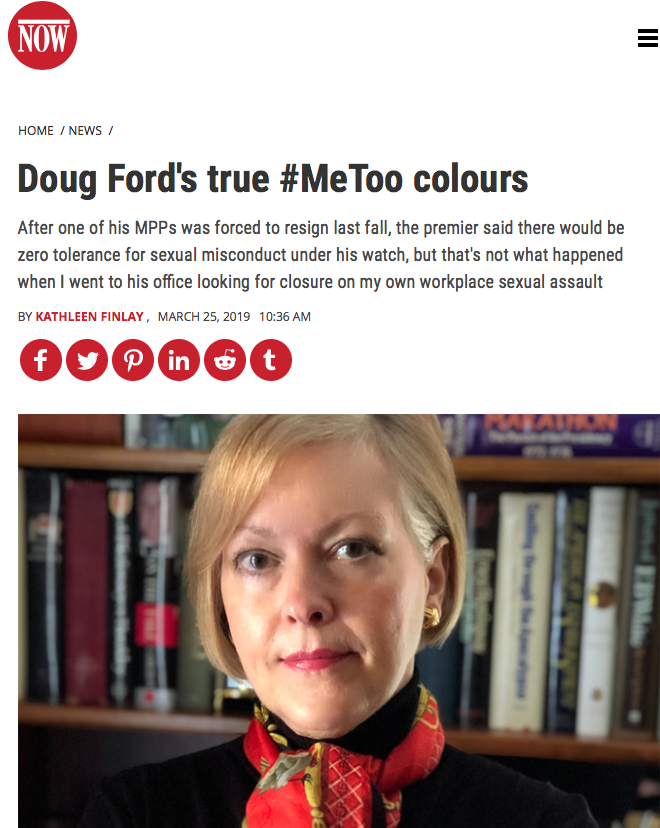 Whistleblowing on the OSC

A Roadmap for the Government to Act Against Gender-Based Violence

Senate’s Mishandling of Sexual Misconduct Scandal is a National Disgrace

Hire US Back Campaign