The Chill of a Tirade

The Chill of a Tirade

Two recent high-profile stories raise the spectre of a chilling effect on the willingness of women to come forward when they believe they have been the victim of sexual assault and sexual harassment in the workplace. 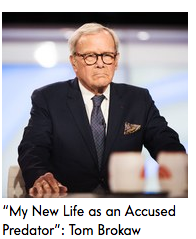 More than 60 prominent women take his side, while NBC refuses to investigate, just like what was done by his company in the early Harvey Weinstein days. Goodbye, #MeToo?

When it comes to sexual misconduct, research shows the danger is not one of false claims.  Less than one percent are found to be false.  The real problem is that women fear coming forward to report wrongdoing and seek redress for legitimate claims.  When three out of four women who experience sexual harassment never report it out of fear of being shamed or disbelieved, or worse, more women are placed at risk because of unremediated workplace harms.

Men who feel they have been unfairly accused have every right to exercise a defence, even a spirited one.  But surely highly experienced journalists, and others, need to make it clear that their strongly voiced comments should in no way be taken as to dissuade women at risk or those who feel their rights have been abused (sexual assault and sexual harassment are violations of protective laws in most jurisdictions) from coming forward.

Shame on NBC for not filling this important role in the wake of Mr. Brokaw’s heated remarks. And shame on them for slow-walking their so-called internal investigation of past abuses that is being conducted by their inside legal counsel whose first duty is to protect her client — not the women who now work, or have worked, at NBC.  Mr. Brokaw is still employed by NBC News.  Its reputation is already stained by several episodes of workplace misconduct at the highest levels.  The network announced that it will not investigate the latest incident, putting NBC back in the same pre-scandal days when Harvey Weinstein’s company refused to investigate his misconduct.

Yet barely a whisper of criticism has been heard — including among the high-powered voices like Time’sUp and Vox whom we’ve reached out and invited to weigh in. Silence has been too damaging to women in the  past to be accepted at this point and on this issue. 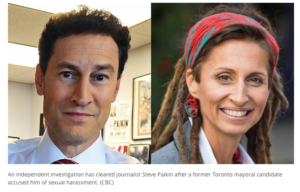 In her report, investigator Rachel Turnpenney said while there is no doubt Sarah Thomson genuinely believes Paikin propositioned her, the evidence brought forward by Thomson and others does not support her account of what happened.

Here’s the forgotten reality in all of this — especially as it pertains to the forgotten women of the everyday workplace. Most victims would not be able to withstand the heavy incoming barrage from columnists and on Twitter if they are not believed or cannot produce air-tight evidence to prove their claims, which is often the case.

Every day I hear from these women, and the nightmares that have overtaken their lives as a result of coming forward and speaking out. The fear of not being believed already holds too many back from speaking out.  Even rare cases like the two above are enough to set the gains of the last months back and create another dark age for women in the workplace. Yet few are  really talking about that fear and the extra steps everyone needs to take to remind women that it is safe to report wrongdoing.  Is this what becomes of #MeToo?