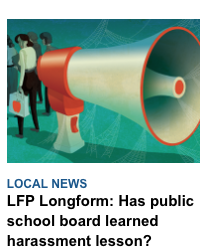 Public disclosure of annual harassment statistics and a ban on non-disclosure agreements will go a long way to preventing sexual harassment of women in the workplace, an advocate says.

“Until we start to get a better picture, we won’t be able to measure any kind of progress,” Kathleen Finlay, founder of the anti-harassment Zero Now Campaign, says.

Zero Now is calling for government and other publicly funded institutions to provide annual reports on the number of complaints received, the outcome of the complaints and financial settlements reached.